In a post made minutes ago on his website, Carmelo Anthony announced that he will return to the Knicks. Anthony met with the Mavericks, Bulls, Rockets, Lakers, and Knicks before making his decision. Terms of his new contract should be released shortly, but it is expected that he will take a slight pay cut rather than signing for the maximum salary.

I am a New York Knick at heart. I am looking forward to continue my career in Orange & Blue and to work with Phil Jackson, a champion who builds championship teams. Madison Square Garden is the mecca of basketball and I am surrounded by the greatest fans in the world. 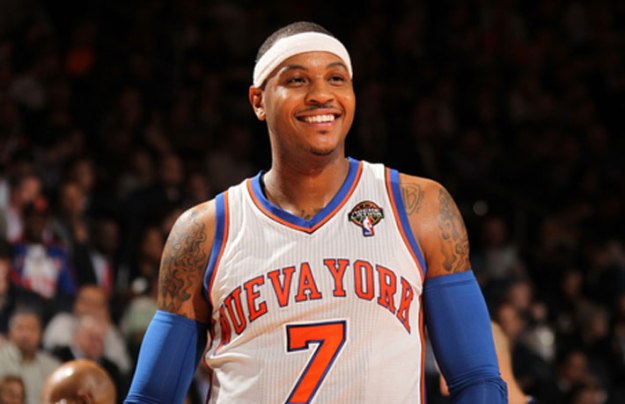 Carmelo Anthony is expected to announce on Thursday that he will sign an extension with the New York Knicks, according to reports (Frank Isola, NY Daily News).

A source close to Anthony said that Anthony “believes in Phil (Jackson)” and, after “agonizing over” his decision for a week, will remain in New York barring a last-minute change-of-heart.

It is unclear whether Carmelo will accept a max contract or take a pay cut. And, of course, nothing is set in stone, at least not yet. But it certainly looks like, as many thought would happen, the lure of the Garden, the big city, and the money, as well as the 13-time NBA Champion Jackson, have convinced Melo to stay with the Knicks.

While Melo’s camp is publicly maintaining that no decision has been made yet. However, reports are starting to come out suggesting he has been leaning towards the Knicks the whole time, that the Knicks expect to keep him, and Anthony has no plans to walk away from the paycut. Isola’s report has not been confirmed by Carmelo’s camp or by other outlets just yet, but he’s one of the more reputable reporters out there… expect something to come out later tonight. We’ll keep you posted.

Expect an announcement tomorrow, when contracts can officially be signed.

Given that Melo seemingly calls a lot of the shots, this is a very telling series of statements.