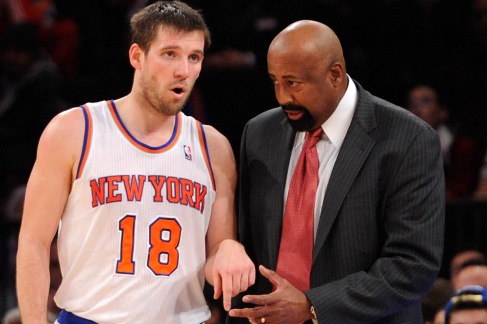 Point Guard Beno Udrih has requested a trade, and the Knicks plan to honor his request, according to sources. Beno’s frustration seems to stem both from his lack of playing time and the seemingly disproportionate amount of blame he has received— particularly from Knicks Coach Mike Woodson— for New York’s struggles.

I have a few thoughts about this.

What? How did Chris Smith get brought in to this? Well, some of you may remember Chris Smith’s tenure “with” the Knicks (and I use the term “with” very loosely).

After the news broke about Udrih wanting a trade, a few people tweeted their (ludicrous) opinions saying that Chris Smith— JR’s younger brother who stood for all that had been wrong with this year’s Knicks until they cut him, and who was described by one NBA GM as the “worst player in the history of the summer league” (The SUMMER leagueI)– deserves a spot back on the team. These tweets included some harsh attacks on Udrih… and Smith retweeted them. Chris Smith re-posted the following tweets from fans about a player who had been his teammate (and his superior) 3 weeks ago.

To recap: the first tweet is racist, cruel, and absurd. The second tweet is just absurd. The third tweet has nothing to do with any of this, but Chris Smith would apparently like to remind all of his followers that he is a proud member of the NBA D-League.

Chris Smith’s judgement and appreciation for people who have given him opportunities in the pst are clearly very flawed.

It’s hard to think of a logical defense for how poorly Smith has handled this situation on social media.

Runs in the family.