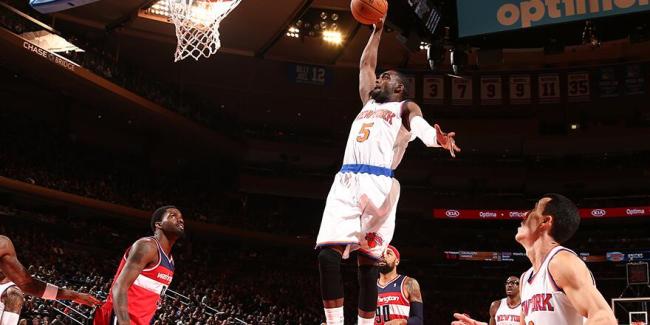 The New York Knicks Knicks lost a nail-biter to the Washington Wizards on Friday night at the Garden, coming up short in the final seconds and suffering a 90-89 defeat.

J.R. Smith had an amazing game for the Knicks, scoring 32 points and hitting eight three-pointers. However, his off-balance, contested shot in the final seconds was off the mark.

Amar’e Stoudemire got off to a slow start for New York, but turned it around after halftime and finished with 16 points.

Raymond Felton struggled for most of the night, but did dish out 7 assists and pull down 5 rebounds. Raymond also hit a huge three to put the Knicks ahead in the final minute.

Pablo Prigioni and Iman Shumpert both looked very solid on both ends of the floor. Pablo had 7 assists and Iman had 3 steals.

Carmelo Anthony was horrible in this game. Melo finished with 10 points on 5-14 shooting, and turned the ball over 9 times. He was also unable to hold on to the ball on his drive to the rim in the final seconds, and as a result, JR Smith was forced to take a ridiculously difficult shot (which he almost made, of course). Melo appeared to be hurt throughout the game, and after the game Anthony said that there were times where he couldn’t use his arm. Melo was diagnosed with a strained right shoulder, and plans to play through it in Miami on Sunday. The Knicks have to hope that this injury doesn’t take a huge hit on Melo’s level of play going forward, but Anthony was very disappointing tonight, and perhaps Woodson should have called a play for Smith, rather than, as Felton spilled to reporters after the game, simply telling the Knicks to “give the ball to Melo”. Anthony did have 8 rebounds, 5 assists, and 4 steals, so there are some positives, but overall, it was a very poor game for the Knicks’ superstar.

The Hawks won tonight, so they have a 1 game lead (really a 2 game lead, because they have the tiebreaker) over the Knicks for the final playoff spot. The Knicks have a chance to make the playoffs, but it is a long shot. New York has lost several games that they should have won, and now they need to hope that Atlanta will return the favor in the final 2 weeks of the season. And at the end of the day, the Knicks will probably need to steal a win or two against teams most people don’t think they can beat.

Tough loss, but it’s not over yet. Let’s see what happens.