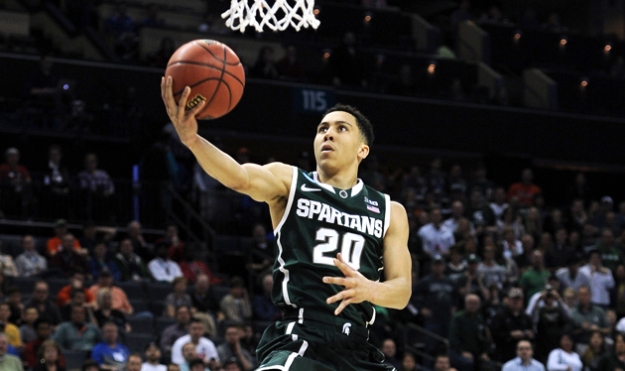 The Knicks have added depth at the point guard position, reportedly agreeing to a deal with Travis Trice, who played in the Summer League for the Miami Heat after going undrafted in June.

Trice had a terrific senior year for MSU in 2014-15, leading the Spartans with 15 points and 5 assists per game. Trice was named the Most Outstanding Player in the Eastern Region of the NCAA tournament after his strong performance helped MSU emerge from the region to earn a Final Four berth.

Trice, 22, is undersized at 6 feet flat, and does not have tremendous athleticism. He draws on his strong shooting and passing ability to create scoring opportunities on the offensive end of the floor. His strong work ethic and agility helped him survive on defense at the collegiate level, but it is questionable whether he can guard NBA point guards.

Trice’s contract is only partially guaranteed and only constitutes a one-year commitment, so this is a low-risk move for the Knicks. The team now has four 2015 college graduates and NCAA standouts in Jerian Grant (Notre Dame, 19th overall pick), Wesley Saunders (Harvard, undrafted), Darion Atkins (Virginia, undrafted) and Trice, which is consistent with Phil Jackson’s emphasis on Basketball IQ. In addition to the four rookies with four years of experience each, the Knicks have a pair of mystery men in Kristaps Porzingis (#4 overall pick) and Thanasis Antetokounmpo to fill out their rookie class.