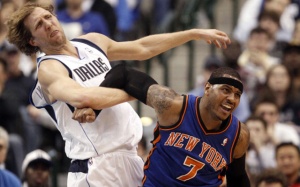 Carmelo Anthony met with the Mavericks in Dallas at owner Mark Cuban’s house on Wednesday, shortly after his meeting with the Rockets. While his meeting in Houston lasted about 6 hours, his chat with Dallas only took about 2. The Mavericks are reportedly trying to sell Melo on playing with a front line of Dirk Nowitzki and Anthony’s former teammate Tyson Chandler.