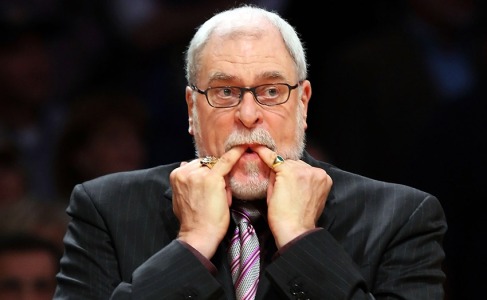 ESPN is reporting that legendary coach and former Knick Phil Jackson is leaning towards accepting the position of President of Basketball Operations for the New York Knicks. Jackson, who won 2 championships as a player with the Knicks and 11 championships as the coach of the Bulls and Lakers, had reportedly met with the Knicks’ front office recently to discuss a return to the game. The Daily News had been reporting that Jackson was uninterested in coaching but willing to consider a front-office role. Jackson had reportedly expressed that his acceptance of the job would be largely conditional on Knicks Owner James Dolan’s willingness to give him major control of basketball decisions, and an assurance that Carmelo Anthony would re-sign with the team this summer. It is not known whether Jackson was given either of these things, and Stephen A. Smith’s reports should always be taken with a grain of salt, but with multiple outlets reporting recently that Jackson was seriously considering a return, it seems very possible that the “Zen Master” will indeed join the Knicks’ Front Office in the near future.