The Knicks head into the offseason with only 8 players under contract (not counting the recently retired Jason Kidd). Who will be back? Who will not? We go through every player on the roster.

These players will be on the team unless they retire, are traded, or are released.

Mike Woodson: No way he gets fired before the season starts

Amar’e Stoudemire: We couldn’t get rid of him even if we wanted to.

Iman Shumpert: The team views him as a future star, would only trade him for a current one.

Tyson Chandler: Good player, important to team. Trade value is a bit low, and contract is hard to trade, anyway. Would only be moved in a package for a star.

Raymond Felton: Good point guard, good contract. No reason to trade him, barring a surprise package for a big-time player.

Marcus Camby: We would probably love to get rid of his contract. But we probably can’t.

Steve Novak: Same contract problem as Camby, albeit probably a more useful player. But other teams could take interest as well.

James White: Could be a useful trade chip. His unguaranteed $1 million salary makes him an option for a team looking to save that amount of money (and cap space). Not very useful beyond that.

These players are free agents. However, the Knicks can bring them back by matching any offer the RFA signs with another team, salary cap permitting. The Knicks are over the cap and do not have Bird Rights for either of their two RFA’s, so to match an offer greater than $1 million, the Knicks would have to dip into their $3.1 Midlevel Exception. To keep both of their RFA’s (or even just the second one on this list), it will likely cost them the entirety of their MLE. 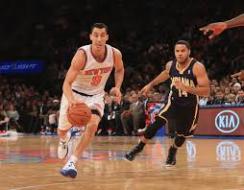 Pablo Prigioni: Knicks can probably only give him $1 million. Might be worth more, but likes New York, and has defined role here. Team may elect to take another point guard in the draft, which could mean the end of Pablo.

Chris Copeland: Worth more than Qualifying Offer of $1 million. Knicks can give him up to $3 million using their Midlevel Exception, which would probably prevent them from signing other Free Agents for more than the minimum. He wants  to stay, and it sounds like they want him back. Will probably receive bigger offers elsewhere, and probably more minutes. He reportedly turned down bigger offers last year to come to New York, and will need to do the same again.

These players are free agents and can sign with any team. The Knicks do not own the Bird Rights for any of these players, and they are over the cap. Therefore, they can only offer the minimum to Barron and Richardson. Martin will be offered the minimum, and probably a slight raise (around 20%) if they are allowed to use a Non-Bird Exception on him. Smith will be offered the Early-Bird Exception, assuming the Knicks want him back.

J.R Smith: Has clearly stated his desire to remain in New York. If the Knicks want to commit to him, they can give him around 6 million per year. Other teams might give him a bit more, but his unpredictability on and off the court probably keeps him in our price range. If we want him back, he should be back.

Earl Barron: Actually can be a useful big man, should be cheap. They should keep him. Not sure if they will.

Quentin Richardson: Can’t see the organization bringing him back. Not much upside.

Whoever we draft will be on the team unless we trade them.

Who should the Knicks bring back? Who should be sent packing? Let us know what you think in the comments!

1 thought on “Which Knicks Will Be Back This Season?”