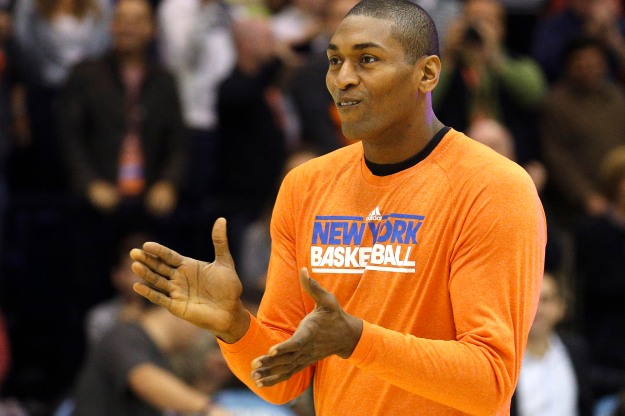 On Tuesday morning, I got a chance to interview Metta World Peace over the phone. Metta, an NBA All-Star, Champion, and Defensive Player of the Year, had some great (and funny!) things to say. We talked about Pandas, name changes, Melo, the Knicks, teeth, China, shoes, Kobe, acting, wrestling bears, and more! Sit back, go ahead and give it a read, and enjoy!

Tommy Rothman, New York Knicks Memes: So you just got back from China, how was that? Because you’d been in America and the NBA for so long… so how was China different on and off the court?

Metta World Peace, NBA All-Star & Champion: China was different, the food was definitely an experience. Sometimes it was a lot of processed food that we ate, with the pastas and stuff. A lot of meat in the diet, not much variety in the vegetables, so I had to figure out ways to eat. But the fans was great, they was really into the game, and the team was great— I look forward to potentially going back next year.

Tommy: And they have that rule there, right? Where Americans, or NBA players, can’t play more than half the game? 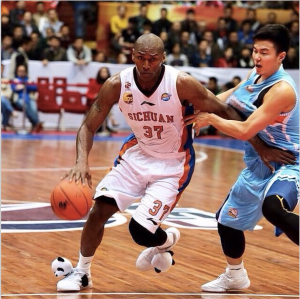 Metta: Well when I first signed with the Knicks it was cool, it was kind of like a dream… I’d always wanted to play at home. I thought we had a chance to win the championship, but you know, we actually didn’t even make the playoffs. The fans were great… the fans really welcomed me home, and they really did want me to stay, but it just didn’t work out.

Tommy: Yeah, between the injuries, and the rotations, and the team losing… it didn’t work out. So was it tough for you to see your dream-come-true scenario crumble so quickly?

Metta: Yeah it was tough because you wanted to see, you know for the fans… I wanted to see the fans win, even more than myself. 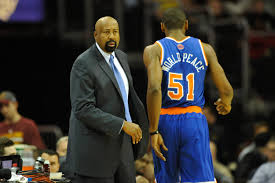 Tommy: Yeah, we have been waiting a while. So now, with the Knicks struggling this year, is it tough to see? Given that you’ve played with some of these guys…

Tommy: …and obviously you were with Coach Fisher and Phil Jackson in Los Angeles too… so is it tough to see them struggling now even though you’re gone, because you know these guys?

Metta: Well, it is… by now I’ve stopped paying attention (to this year) after, by now, you know…. they have no chance to make the playoffs, but prior to that, you know, I was into it. Into the whole Phil Jackson and Derek Fisher era. And I’m still into it. I still think they can turn things around.

Tommy: Yeah I was gonna ask about that, how you feel about the direction of the franchise… you know Fish and Phil well, do you think Derek has what it takes to be successful as a coach, and that Phil can succeed now in his team-building, GM-type role? 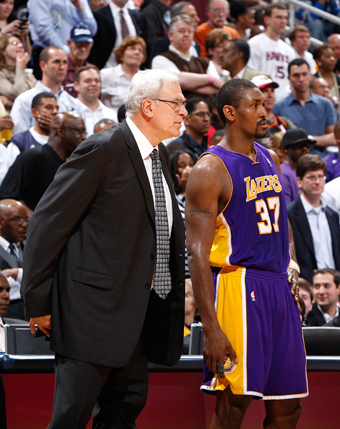 Tommy: So next I was gonna ask about Carmelo. You’ve played with and against some amazing players, and Melo isn’t the first guy you’ve played with who sometimes gets heat for being a “me-first” guy… Kobe also had that label. Kobe, of course, has won championships— with your help, since you hit that winner in game 7— so what do you think Melo has to do to become a “winner” like Kobe? Do you think he needs better teammates and that’s it? Or do you think he needs to make specific adjustments to his game?

Metta: I mean… I would love to train Melo. There’s just things that I see, as a player… there’s things I see that could help Melo. Melo’s already a—(pauses)—he’s a top 10 player in the NBA, he’s a top 3 scorer in the NBA, maybe he’s a top 12 player. So he’s not a top 3 player, he’s a top 3 scorer. And I think I could help him become a top 3 player. But I would need time, you know, to train him. It’s something I would love to do, but it’s not something I can do right now because I’m playing right now. But yeah, I think I could train him to be a top 3 player. 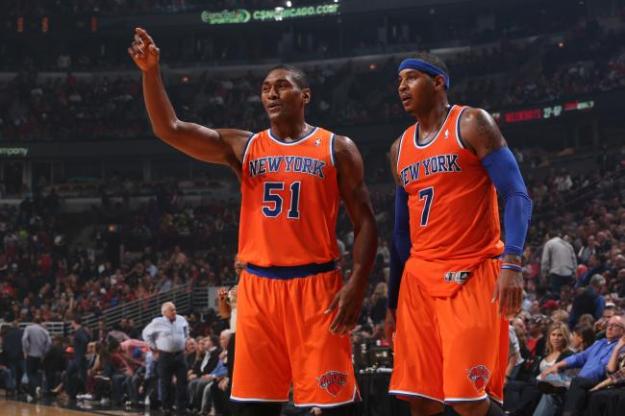 Tommy: And then with Kobe and Melo, you played with both and you played against both, obviously they’re both great scorers… where do you see similarities between the two, and where are they different?

Tommy: So you talked about training Melo… when you’re done playing, do you see yourself pursuing an assistant coaching role or some kind of mentoring role in the NBA?

Metta: Yeah I’m coaching the girls at Palisades High School, and I coach the boys, the varsity girls and the varsity boys. And I’m coaching three men’s teams in LA in the summertime, and I’m also coaching boys’ teams in the summertime. So I’m coaching, you know, five or six teams, and then I’m also playing, I’m a player-coach on the men’s teams. This summer we going on a tour in Asia and I’m a player coach. So I’m still actively playing, you know, really well. So I’m not prepared to step out of my zone right now. Maybe when I finish playing, I could focus on coaching. Right now I’m just— yeah, maybe when I finish playing I’ll focus on coaching in the NBA. 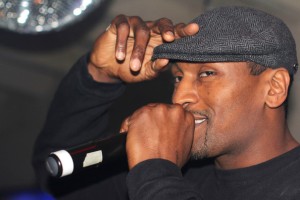 Tommy: So you had a part in the movie “All Wifed Out” a couple years ago, a few guys from the studio actually messaged me before the movie came out and let me post an exclusive clip on my blog because you were playing on the Knicks at the time. It’s the clip where somebody loses the handle on their drink and it flies across the room, and it lands on you (Metta Laughs). Yeah, it was pretty funny… did you write that part?

Tommy: I know you do some rapping, is acting another thing you plan to pursue more when you’re done playing?

Metta: It just depends, I kinda let it flow. I’m not forcing anything, you know, I’m not forcing coaching or I’m not gonna force acting or anything, it just depends on the time. Right now I try to center my life around my children. And then if I have time to do anything else after that I’ll do it, if it’s not too time-consuming. So yeah, I coach a little bit here, coach a little there, act a little bit here, act a little there, it just depends on the timing and the situation, it’s all around my children. 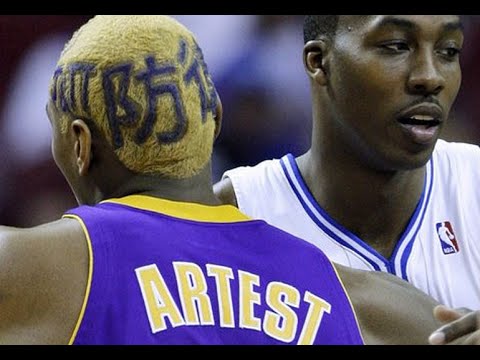 Tommy: So the next question is the one I think everybody’s waiting for… do you think your name, your LEGAL name, will be Metta World Peace for the rest of your life? Or do you see another change coming? Because we know you’ve been flirting with the idea of “The Panda’s Friend” lately…

Tommy: So what do you think happens first… the Knicks winning a championship, or you changing your legal name?

Tommy: Alright, good to hear. So you had your Panda Shoes, which a lot of people laughed about on the internet, with the little Puff Panda on the tops… A lot of my fans are wondering, are those for sale? A lot of people are trying to get those shoes. 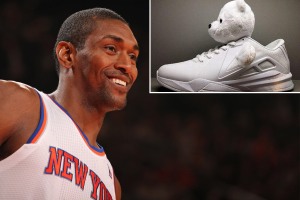 Tommy: Awesome. So Amar’e Stoudemire, Jimmy Kimmel, and Cousin Sal teamed up to pull a fast one on you last year, shortly after you left the Knicks…

Tommy: …And it wasn’t the first time Jimmy had gotten you. So do you think they’re gonna try to get you again soon? Are you on your guard?

Metta: Yeah, definitely on my guard. You know they tried to get— they got me (laughs). I was set up. So hopefully I can get them back, I’m trying to get Jimmy Kimmel back, he got me twice already. 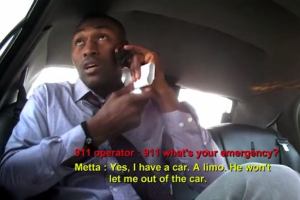 Tommy: Yeah I was gonna ask if you had any revenge pranks planned against STAT or Jimmy.

Metta, laughing: Yeah I would love to. I haven’t had any time to think about it. We’ll play it by ear.

Tommy: So my brother, he’s not a big basketball fan, but his favorite Metta World Peace related thing is your rant about teeth, about baby teeth.

Metta: Yeah that was pretty cool.

Tommy: Because the question had nothing to do with it, and you just started talking about your baby teeth. So do you have anything to expand on that? And how big is dental hygiene in your life?

Metta: It’s… it’s big, you know. I just think you gotta be, uh, dentally hygienic (laughing). That question was so funny. The teeth thing was actually something I had prepared the night before. So, it wasn’t like I just thought of it right then. 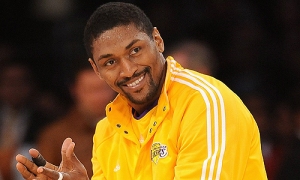 Tommy: So whatever the interviewer asked you that day, that’s what you were gonna tell her?

Metta: Yeah, no matter what she asked me. That day I was ready, it was great. And you know, it picked up and went viral, it was great. 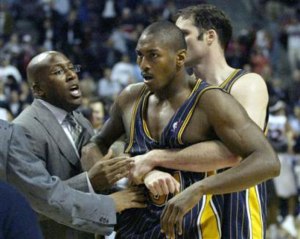 Metta, laughing: That’s a funny one. But I would say maybe Ron. Ron was more loose, he was a little wild. So maybe Ron. Metta probably would have tried to break it up or stop the fight.

Tommy: So the natural follow-up question is, if you wrestled a panda, who would win? 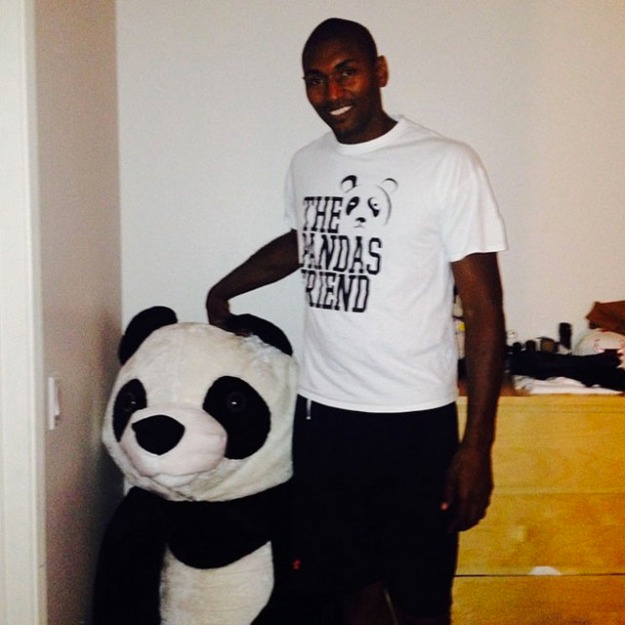 Tommy: So back to more serious stuff, the Knicks obviously will have a high draft pick. And they’ll have a lot of cap space… you were a free agent a couple times in your career… when there’s a star free agent, what do you think the guys like Marc Gasol and Aldridge… obviously they’re going to see the Knicks’ terrible record, but do you think there’s actually a pull in New York? Do you think those kinds of guys are going to be interested in New York after the season?

Metta: Yeah, I think so. Because they have the cash, and they know New York wants to win, and New York is just trying to figure out HOW to win. But I think if you’re a real star, you’d go to New York, and you can help contribute to some winning ways. But being from New York, I think New York wants to win, you’re just still trying to figure out how. Over the last couple years… over the last couple decades, they just couldn’t get over the top. But they still want to, that’s the big thing.

Tommy: And I ask this to every player I interview, what’s the advice you have for young athletes?

Metta: Young athletes? You just gotta be smart, evolve, stay connected, have a great time. You know, it’s a great life, so you just gotta enjoy it. 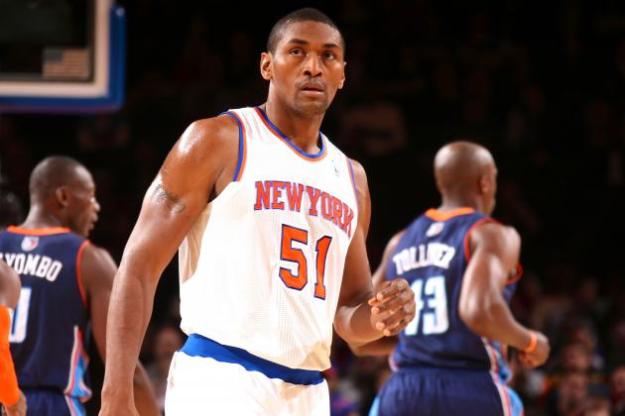 Tommy: Now, you have your own blog, I can’t believe you got that interview with Nicki Minaj, I know you’d been chasing that for a long time.

Metta, laughing: I know man. And I’ve got the one with David Stern coming up too, looking forward to that.

Tommy: So that’s all I have, thanks for your time!

Metta: Yeah great no problem! Thanks.

Thanks to Metta for his insights!